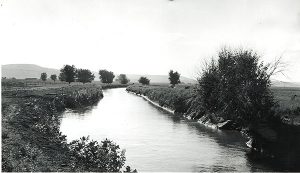 In 1820 Major Stephen Long followed the South Platte River along the Front Range of the Rocky Mountains, leading the first group of U.S. soldiers into the region. Long’s travels left an important legacy because he labeled the area the “Great American Desert,” creating an image of bareness that initially discouraged prospective settlers.

One of the first observers to describe the Poudre was explorer John C. Fremont, who in 1842 crossed the river near present-day Windsor. It is likely he may have glimpsed Native American bison hunters. Native American tribes valued the river as a good place to gather plant foods like roots, cattails and chokecherries. For hundreds of years, nomadic tribes occupied the river valley on a seasonal basis. Different Native American groups such as Arapaho, Cheyenne, and Ute, moved through northern Colorado.

Soon after the explorers, fur trappers combed western waterways in search of beaver. Until about 1840, the fashionable societies of Europe and the U.S. craved beaver felt hats. Yet trappers may have been disappointed with the Poudre. While trading posts were established near neighboring rivers, no significant post was built near the Poudre, which suggests a scarcity of beaver. Some white trappers developed meaningful trade or family relationships with local Indians, and marriage to Indian women was not uncommon.