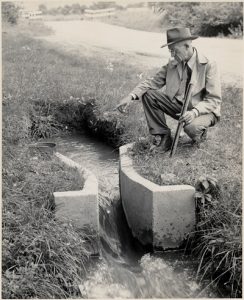 State experts also made a significant contribution to the accurate measurement of river flow. The first State Engineer in 1881 installed a staff gage at the mouth of the Poudre Canyon and took measurements of the flows that he provided to the water commissioners. In 1883 E.S. Nettleton, the second State Engineer, installed a permanent gauging station that included a continuous self recording device.

Ralph Parshall, one of CAC’s first civil and irrigation engineering students, returned in 1907 as a professor. Later employed by the U. S. Department of Agriculture, working in partnership with the college and using the college’s hydraulics laboratory, he developed the measuring flume that bears his name. Patented in 1925, the flume is precise, inexpensive and easy to use. The Parshall Flume remains the world’s most popular water-measuring device.

The momentum of technical water studies carried into the non-academic world as well. B.S. La Grange, the first water commissioner on the Poudre, theorized that irrigation water soaks into the ground which eventually flows back into the river. His experiments were the first measurements of “return flow” in the United States.

By 1900, a new crop appeared and reshaped northern Colorado. Initially, farmers were reluctant to grow sugar beet seeds, but the potential was tempting, as the beets were touted by experts as being able to thrive on long hours of sunlight, low humidity, steady amounts of moisture and good soil, all available in northern Colorado.

The sugar beets flourished. Between 1901 and 1906, sugar factories sprang up in Fort Collins, Greeley, Windsor and Eaton. These factories used water to convert beets into commercial sugar. Colorado was the largest sugar beet producer in the country.